Grumpy old weirdo Manzini (Anthony Newly) operates an antique store of bizarre oddities where he employs spunky teen Dodger (MacKenzie Astin) who’s getting harassed by bullies and bored by his boss’ pithy, whining about the mundane modern world. They are blissfully unaware that down in the basement of the store, a mysterious old garbage can rumbles, whispers, and occasionally farts. Meanwhile, Dodger is in love with John Boy-thin Tangerine (Katie Barberi), who’s at least ten years older, two feet taller, and twelve grades dumber. Unfortunately for Dodger, she hangs out with slickster Juice (Ron MacLachlan) who torments him while she laughs hysterically at his misery. What’s not to love? While trying to woo the big-haired Tangerine in the store, Dodger accidently knocks over the garbage can releasing a flurry of bodily function -related hilarity unequaled until Adam Sandler’s career. So unleashed are the Garbage Pail Kids, an unholy collection of other-worldly punny miniature alliterative horrors including … 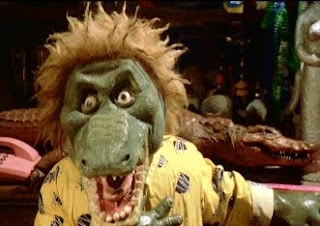 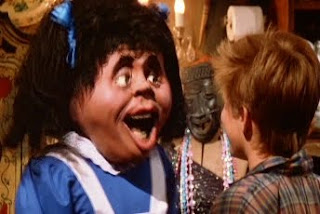 Valerie Vomit. “I will devour your soooouuuulllll!!!” 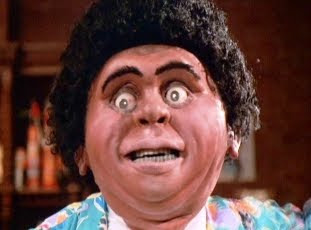 Windy Winston. GAAAAHHH!!! Kill it, kill it with fire!!!
And also too nauseating to vid-cap are pants-wetter Nat Nerd, bad-breathed Foul Phil, booger-eater Messy Tessy, and 50s juvenile delinquent Greaser Greg. Anyway, despite the presence of his friendly tiny nightmares, Dodger continues to be tortured by Juice and his heavy metal-pantsed crew. By merely looking in Tangerine’s direction, he is subjected to drowning by raw sewage. Yup. Fortunately, the GBK step in and rescue him from a poopy end. So while Manzini tries to conjure a musical spell to return them back to their canned hell, the GBK watch Dodger take a bath and then try to eat his toes. Yup. Dodger takes advantage of the GBK’s unique skills designing crappy 80s fashions and uses them to get closer to Tangerine who has dreams of being a famous designer. But Tangerine is still evil, double-crosses horny little Dodger, and hatches a plan to make the GBK her personal sweatshop and then send them to the “State Home for the Ugly” where old guys net ugly, fat, and clownish undesirables and then apparently kill them in a trash compacter. But through the power of teamwork sing-alongs, moral musings on beauty fixation, and toxic farts, the GBK lay the smackdown on Tangerine, Juice, and other citrus-related villains in a showdown of little-person fury slightly less exciting than a stale stick of gum.

To paraphrase film critic André Bazin, the captured cinematic image can be viewed as an embalming of a moment in time rescued from relative corruption, revealing the representation of God manifesting creation. If indeed Bazin lived long enough to see The Garbage Pail Kids Movie, he would have changed the word “God” to “Angry Retarded Satan” and “manifesting” to “butt-pumping”. And in the boot camp for trashy movie fans, The Garbage Pail Kids Movie is the nearly impossible wall hurdle. You’ll just have to do it or you won’t become one of us. And unlike closet-hanger Sid Worley, I made it through shitty movie flight school nauseated, exhausted, and perhaps a little triumphant. Based on series of trading cards popular in the 80s, the movie features the Alfred E. Neuman-esque title characters in live action display of puke-inducing terror. The cards were intended to be a gross-out parody of the popular Cabbage Patch Kids, immensely popular dolls that came complete with their own unique name and birth certificate. I used to collect the sticker form of the cards and then covered my sock drawer with them. Ma Tremendo was not pleased. Anyway, the movie is beyond miserable and misguided, but remains a powerful example for a movie producer to express “This is where we went wrong”. Music composer and Joan Collins’ ex Newly is embarrassed, confused, and out of place in this bizarre and twisted thing. Astin is an admirable workman who just clocks it in and tries to escape unscathed before he can make it to the Facts of Life audition. The creature effects are indeed hallmark of the disturbed, provided by John Carl Buechler who also created the terrifying soul-scarring psyche-raping critters of Troll released the year before. The movie also tries to inject some sermonizing about corporate America and the culture’s superfluous fixation on physical beauty while trying to make us root for some of the most revolting, grossed-out and hateful little beings on two gimpy legs. But when the day is done, the movie retains its dubious distinction as an 80s oddity embalmed in time, a “kid’s” film filled with references to voyeurism, finger-banging, urine, cannibalism, shit-eating, gang violence, kidnapping, betrayal, exploitation, racism, attempted murder, and genocide - you know, stuff that every growing cherubic child needs to learn about eventually. But I think my reaction to The Garbage Pail Kids Movie is best summed up by ol’ V.V. herself: 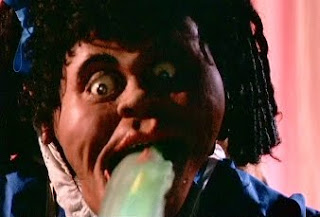