Right off the bat, we are informed that undercover cop Joe Marshall (Matt Hannon) is a total martial arts badass who speaks fluent Japanese and practices the art of the Bushido. We are told this, mind you. We never actually see these claims in action, although there is one shot where he even bothers to look the part of hence-the-title. 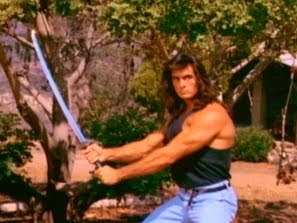 Yeah, doing samurai stuff really works your delts.
Anyway, Joe’s been hired by the Los Angeles Police department to help quell a violent rivalry between the Japanese Yakuza and the local Chinese mob. Apparently, it takes a samurai to perform basic policing. Aided in his mission is bumbling, mumbling, and stumbling partner Frank (Mark Frazer), the only black cop in the world with zero coordination, a bare grasp on the English language, and a hambone routine away from Stepin Fetchit. 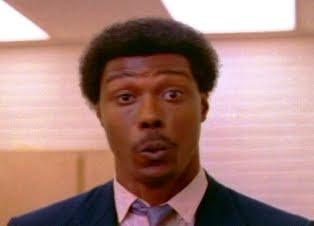 Dey be ninjas heah!
When not confusing the fuck out of the viewer with poorly edited car chases and men’s bathroom wall innuendo, Joe and Frank attempt to take down the gang of merciless and mulleted Fujiyama (Joselito Recober) and his elite chin-fisted assassin Yamashita (Robert Z’Dar). 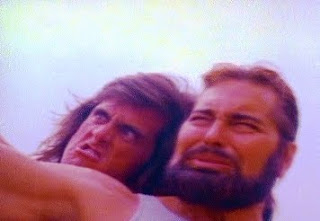 Not in the chin!
So when he’s not lifting sofas, getting warm and ready, brushing his Miss Clairol wig, and banging every skank in town, Joe is harassed by Fujiyama’s Skid Row minions, scattered with machine gun fire by zombie Yamashita, and pursued by redheaded killer slut Cameron (Krista Lane). After some goofy car chases and nausea-inducing sex scenes with Joe’s banana warmer in full view, our heroes catch up with the gang’s hangout at the evil Red Lobster where he confronts the baddies, ducks a bunch of fat guys, and hits on Fujiyama’s squeeze (Jannis Farley). And so follows a gratuitous helping of boobie and crotch-shots, stirred in a mélange of complete narrative incoherence, peppered with hints of “We wrote the script as we shot this thing”, topped off with crew-coke-snorting for continuity, a dentist’s office for a police station, and random shouting for dialogue. This concoction somehow leads us to the final showdown between musclehead Joe and musclechin Yamashita in a demonstration of the true way of the Bushido, which apparently means “We have no idea what’s going on”.

Amazingly, I never watched much Joe Bob Briggs back when he had his bad movie shows Drive-In Theater and MonsterVision in the 80s and 90s, probably because it was on too late or I was in my hoity toity black-clad cinemaphile Hollywood-hating phase. Oh, to be young and elitist again. So I guess I missed out on a lot of Briggs-approved fare at time, but like to think that I’m relatively caught up. An exception is the kung-fu flick that Joe Bob introduces as Samurai Cop, a spectacularly bungled and incoherent thudding turkey of a 80s action movie. If movie knock-off factory Asylum were around in the 80s (for all I know, they were), this movie would be their Lethal Weapon clone. But not even the bottom-line driven filmmaking thrift of Asylum approaches the level of depraved incompetence that this movie wallows in. But to call this movie bad and then make fun of it is way too easy, and many before me have torn it apart better than I can. So, I’ll let my good friend Joe V. from Provo, Utah* extrapolate the good stuff gleaned from Samurai Cop:

Thanks, Joe. The movie, which looks like one of those cheap Turkish rip-offs of Hollywood movies, was actually directed by an Iranian, Armir Shervan, who apparently chose to express his hatred of America by making films and releasing them here. Actually, there are a lot of unintentionally hysterical moments from a sword fight shot by Benny Hill to a decapitation in a dental chair to the “script” that featured lines such as “I will bring you his head and place it on your piano!”, “Shoot! Shoot him! Shoot!” and “Have you been circumcised?” In this respect, Samurai Cop is like a golden cheese-drenched gift from the Lord of Awful above, spreading a warm glowing layer of crap on damned souls who crave this miserable shit.

*Apologies to everyone save one who will not get this reference.
at 8:35 AM