College students Joe (Cameron Dye), Mother Tucker (Tim Robbins), and nerdy Wendel (Stephen Geoffreys) depart their cold and featureless Iowa and travel for hot and featureless Palm Springs for the annual ritual of booze swimming, cooze seeking, aand Jews-annoying ritual known as Spring Break. They spend their break in Wendel’s cousin’s condo where Joe and Mother find that they are not above humping on children’s bunk beds. Also in town are a couple of rival frat guys who play a nasty prank involving a foursome, women’s underwear, and herpes. Yup. Previously, Wendel’s Dad (Max Wright) bribed Joe and Mother to get Wendel laid, and they take him on a wonderful fashion makeover montage to turn this guy … 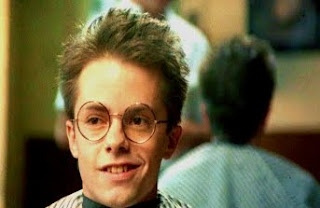 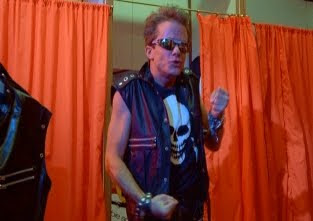 Into this leather guy… 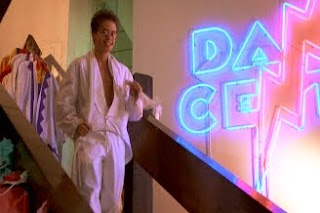 Or this kung fu disco dancer … 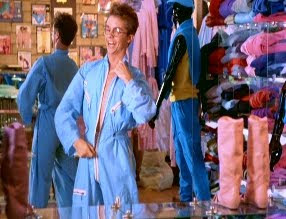 Or a wacky race car driver. (Makes you wonder why Geoffreys later became a gay porn star. It’s true!)
Fully expecting Wendel to bomb, the guys take him to a bar where he quickly meets meek Nicole (Amanda Bearse) and the two nerds hit it off. So the rival frat guys and Joe and Tucker meet again, this time to make a bet over who will be the first to get into shy girl Ashley’s (Sheree J. Wilson) pants. Joe tries the pathetic approach where he pretends to be suicidal while the other guy poses as a yoga guru to get all Namaste with her nether region. Both efforts at depravity fail so they guys decide to cheat. Meanwhile, Wendel is getting serious with Nicole, who turns out to be a little rich girl with overprotective Dad. He’s got to impress her family if she’s to ever gain her hand, but in a wacky misunderstanding, he gets arrested for attempted rape and then humiliates the local nearly-insane Sheriff (John Vernon) with comments about his butt. Yup. So Joe cheats by doctoring some photos he took of Ashley naked and the other guy cheats by recording an out of context but suggestive exercise session with her. Scumbags! So Ashley catches on and I fully expected an I Spit On Your Grave level of vengeance to follow, but it doesn’t. She just pouts and walks away in a huff. Meanwhile, Wendel is shocked to discover that Nicole’s Dad is the Sheriff and when he kicks the nerdy crap out of him while Nicole cruelly smiles and looks on, Wendel decides it’s time to cut his losses and leave town. But his bad luck isn’t over yet as he car breaks down in the middle of the desert. Also leaving town is Ashley and she just happens to pass Wendel on the same road. So, you can pretty much guess what happens next with 101% accuracy. Yes, the nerd gets the girl. Yes, the frat guys get drunk and laid. Yes, John Vernon has a coronary. But no, I did not have enough soap to wash away the ick after watching this crude nudie flick.

The 80s were a productive and profitable time for teen sexploitation films and Fraternity Vacation is perhaps a forgotten example of the dirty, empty, soul-befouling seediness these movies proudly espoused. How can someone like a movie in which the plot involves rival frat guys competing to bed a lonely woman with a $1000 and schlong bragging rights at stake? Well, the answer is out there and maybe staring me in the face because films like this are still being made. The movie is pathologically sleazy, vehemently misogynist and void of any sense of morality with none of the narcissistic, shallow, and boner-obsessed characters receiving comeuppance in any form. Hell, in fact even the antagonists are rewarded at the movie with a simple wink and a hug. Now, I’m not gonna get all high and mighty on you. I did laugh at some of the hope-to-get-laid type moments in the movie and giggled at the stupid teen sex clichés that unfortunately are still in wide practice today. But fortunately, there’s much to point and laugh at in the movie including a pre-political Robbins doing sleazy shtick, moments of really, really gay male bonding, and shameless, devolved, and kinda hilarious teen sex obsession. Oh, and boobies. Lots and lots of boobies. And a weird Britt Ekland cameo. Head scratcher, that one. But really, Fraternity Vacation isn’t the worst one of these out there, even though the jokes fall flat, visual gags are few and far between, and John Vernon plays only a minor role. And it was also seeing Bearse and Geoffreys work together again either just before or after their team-up in the underrated vampire flick Fright Night. So please do not misunderstand, Tremendo loves me some stupid sex comedies, but this one was so sleazy and exploitative of women that I barely had the energy to vidcap the nude scenes for later use and make charcoal drawings of Barbara Crampton’s cleavage.