The first mention of sushi was discovered in a Chinese dictionary published at the end of the 2nd century. As a preserved food, salted fish was an important source of protein. The book described a process to clean and gut fish which was kept in rice so that the natural fermentation of the rice helped preserve the fish. This type of sushi is called nare-zushi, and was taken out of storage after a couple of months of fermentation. The fish was consumed while the rice was discarded. Sushi made its debut in than in , and at a far earlier date than previously thought. It is believed that sushi was introduced to about five hundred years later, in the 7th century A.D., though the exact date is disputed.

Since Japanese prefer to eat rice together with fish, the sushi, called seisei-zushi, became popular at the end of Muromachi period. It is interesting to note that many kinds of sushi have been developed in but that in foreign countries sushi no longer exists or it exists in its original form at best. In , sushi gradually came to be associated less with rice until rice was hardly used, and at the same time, sushi as a common dish declined. By contrast, sushi came to be more and more closely related to rice in Japan until it developed into today's sushi which is eaten together with sushi rice. This type of sushi was consumed while the fish was still partly raw and the rice has not lost its flavor. The rise of the popularity the dish has helped evolve sushi into cuisine rather than a way to preserve food.

Later in era, Japanese began making haya-zushi, which was created as a way to eat both rice and fish, and this dish was unique to Japanese culture. Rice was mixed with vinegar and combined not only with fish but also with various vegetables and dried preserved foods. Today, each region of Japan still preserves its own unique taste by utilizing local products in making different kinds of sushi that have been passed on for generations. 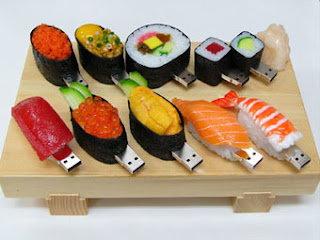 At the beginning of the 19th century in , the food service industry was mostly dominated by mobile food stalls, from which nigiri-zushi originated. This type of sushi is the actual raw fish sitting atop of bed of rice wrapped in a ribbon of seaweed. Edomae, which translates to "in front of bay," was where the fresh fish and tasty seaweed for the nigiri-zushi were obtained. As a result, it was also called edomae-zushi, and it became popular among the people in after Yohei Hanaya, the legendary sushi chief, improved it to a simple but delicious food. Then, after the Great Kanto earthquake in 1923, nigiri sushi spread throughout Japan as the skilled edomae-zushi chefs from Edo, who had lost their jobs, were diffused all over Japan.

In the wake of increased health consciousness in the post-war era, sushi became one of the more popular and healthy meals around. Today, American sushi bars are unbelievably popular. With the introduction of sushi machines, which combines the mass production of sushi with the delicate skills used by sushi chefs, making and selling sushi has become more accessible to countries all over the world.