Diary of the Dead

Directed by: George A. Romero
Written by: Romero

I begin this review of George Romero’s latest effort with the following statement: the legendary director has seen better days and judging from the latest entry in the Dead series, it’s time to hang up the ol’ zombie hat and call it a career.

Before anyone starts to give me crap about my snobby, picky, purist horror movie attitude, let me provide some clarification.

I am a huge horror film fan and Romero is without question a master of the genre. He gave birth to zombie movies as we know them today and thrust images of the undead into popular imagination with the original classic Night of the Living Dead, the masterpiece Dawn of the Dead, the underrated Day of the Dead, and the flawed but entertaining Land of the Dead. I consider him a true marvel of the film industry, as do millions of others, but hasn’t really given him a fair shake through the years. In his non-Dead filmmaking time he has offered achingly bad indie efforts (Bruiser), failed experiments (Monkey Shines), and mixed commercial success (The Dark Half), with the occasional triumph (Creepshow). Despite his inconsistent track record, Romero has influenced dozens of horror filmmakers, writers, actors, and make-up artists all over the world. 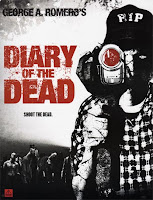 Movie Poster of the Living Dead

Given that, I still stick to my original statement.

Last Friday I attended the west coast premiere of his latest film Diary of the Dead, a radical departure in style and tone than his previous Dead films. The pic debuted in as part of LA’s Screamfest, for which I was able to secure a ticket through various wheelings, dealings, and headlocks.

Diary’s story begins with a group of students filming a horror movie in the early days of the living dead phenomenon. As society starts to break down, the students embark on a journey through the zombie-infested landscape of mid-Pennsylvania to reach safety. Conflict arises when the director of the student film decides to chronicle the unfolding events with his intrusive camera to document zombie attacks, unprecedented levels of horror and devastation, and whiney bickering.

Romero uses a variety of techniques to shoot this documentary-style, much to an extent that the comparisons to Blair Witch Project will be inescapable, if not ridiculous. He employs digital cameras, cell phones, and even the irritating MySpace to tell the story. Maybe it should have been called Vlog of the Dead? The result is an admirable attempt to bring something different to the table of the living dead, and his radical visual style is impressive, however the message overwhelms the action and slows down the pacing to a zombie-like crawl. Unfortunately, Romero’s moralizing approach about the dissemination of information and new media doesn’t work most of time, and the constant conflict between the characters doesn’t center on the will to survive, but rather on the superfluous (given the circumstances - zombies are eating people!) argument on the ethics of the cameraman’s intent and motivation to document the events and tragedies that are unfolding.

Romero’s visual and thematic departure in this film (echoed by DePalma’s forthcoming Redacted) doesn’t really do much for the zombie genre. Rather, the film serves a vehicle to express Romero’s thoughts about mass media, new digital technology, and the alternatives to traditional media available to the people. However, the nail is hit over the head over and over throughout the film. Obviously, Romero has aspirations that extend beyond what is typically expected of him, and in technical terms he succeeds. But the script is hackneyed, the performances screechingly annoying, and the character development almost non-existent. Much of the joy of Romero’s Dead films is the ability to hate, love, and relate to his characters, and all this film does is generate apathy for what essentially are clichéd Dawson’s Creek cardboard cutouts. Diary is not a gory film, nor does it really aspire to be one and Romero pokes fun at horror expectations with obvious references to himself and the genre as a whole. In this respect, the film succeeds but not at all frequently.

Ultimately, the film will suffer commercially from fans’ expectation of the Romero Dead films, which it delivers in short segments including the screen time of Samuel, one of the greatest characters to ever appear in a zombie movie. On an artistic level, Romero is no longer interested in making movies that follow marketed formulas and trends. He’s reached a point in his career where he finds the need to express himself and the things that concern him. Unfortunately, the ‘war movie’ by George Romero or the ‘serious drama’ by George Romero won’t exactly ignite the imagination of the studios and their deep pockets. But after 40 years of undead filmmaking, Romero still knows how to kill his zombies in gritty, low-budget fashion with witty ideas sprinkled here and there.

So until George calls me back on my zombie screenplay I gave him (Galaxy of the Dead, aka ZombiVerse), I have to say that I hope he considers entering retirement, perhaps in an anti-zombie fortified Pittsburgh homestead.

We’re coming to get you, George.