One to Watch: Force of Evil

Joe Morse (Garfield) is a slithery up-and-coming Wall Street lawyer with an eye on making millions working for disreputable gangster and numbers-runner Ben Tucker (Roberts). Morse has conceived a scheme that will destroy the smaller numbers racket operation in the city and force them to either join Tucker or allow themselves to be bought out making him New York's most powerful crime boss. Morse and Tucker conspire to have the number 776 come up on the Fourth of July in the hopes that many will bet on the number and thus bankrupt the smaller "banks" or numbers runners. Unfortunately, one of these small time bankers is Morse's older brother, Leo (Gomez). Leo raised Morse and paid his way through law school. Joe tries to save Leo from succumbing to the scam an has his operation raided by the police, which buys him time to bypass the July fourth conspiracy. Furious with Joe's meddling, Leo refuses to shut down, eventually goes bankrupt, and becomes a victim of the scam. After the Fourth of July, Joe saves Leo financially, but the two suddenly find themselves in the midst of a seedy power struggle in the underworld of urban crime. It is a struggle one of them will not survive. 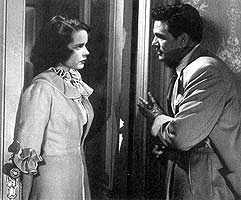 Marie Windsor and John Garfield in Force of Evil

One of the many film genres to emerge after World War II, film noir depicted post-war pessimism in the form of gritty crime dramas and dark romantic thrillers. Force of Evil is a tough-as-nails urban crime pic supported by a powerful performance by the long under-recognized . Along with actors such as Robert Mitchum, Dick Powell, and Alan Ladd, gained notice and prominence through work in film noir as romantic tough-guy leading men. Often described as a late Fonda and an early Brando, escaped a difficult life in the slums of when he won a fellowship to attend the prestigious where he connected with the influential Group Theater headed by method-mystagogues Stella and Luther Adler. He performed primarily in gripping social realist plays about slum life and social oppression on the and stages. Garfield received a glance from Hollywood in his performance in Clifford Odett's play Golden Boy, a drama that was to launch the career of William Holden when filmed years later. 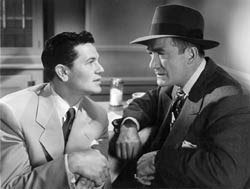 Seedy men and desperate times in Force of Evil.

Warner Brothers contracted to do several films in the era of the studio's socially conscious melodramas where he became trapped in tedious and repetitive roles. He eventually left Warner for MGM where he was able to set up his own production company which ultimately produced Robert Rossen's Body and Soul 1947), which displays 's greatest performance as a soul-searching boxer. Force of Evil was his second independent project and prominently displays his talent of portraying deeply torn characters that are caught between loyalties and duties. died of a heart attack in 1952, just before a revival of Golden Boy was taking shape. Critics and biographers of have speculated that the strain of his inability to find work in following publicity of his strong leftist views and his eventual investigation by McCarthyists directly caused his untimely death. Director Abraham Polonsky was no stranger to the communist witchhunt either. By way of his association with leftists Garfield and Rossen, Polonsky was blacklisted himself and was unable to direct a film until 1969's Tell Them Will Boy is Here.

Force of Evil's powerful narrative and performances hit home the notion that the film is a critique and satirization of emerging corruption in the American capitalist system in the post-war period, an idea that even today is difficult to pull off believably and aesthetically in an established genre film. And this subversive quality is what film noir was all about, "neo-noir" notwithstanding. But perhaps the film will be best known for the strong and emotionally-trying brother relationship between Garfield and Gomez. Just before production of Raging Bull (1980), director Martin Scorcese, so inspired by Rossen and Polonsky, screened both Body and Soul and Force of Evil to stars Robert DeNiro and Joe Pesci who then modeled their performances after the brother relationship in Polonsky's film. Of course, Raging Bull went on to be voted the most outstanding film of the 1980s by both critics and cinephiles alike, thus confirming the impact of Polonsky's passionate and hard-hitting work.

Force of Evil is one of my favorite movies of all time. John Garfield is the toughest Jew in cinema!