Directed by: Robert Ben Garant
Written by: Garant and Thomas Lennon
Starring: Dan Fogler, Christopher Walken, Maggie Q., George Lopez, James Hong
Posted by: EL TREMENDO
Last week I was in . It was hot. I was bored. And no one was putting out for ol’ El T.

So I headed down to the local desert multiplex, stared at the sad marquee for 20 minutes, noticed that I was in flames, and rushed inside and extinguished myself with an Icee.

I selected the pleasantly dumb Balls of Fury as my entertainment selection for the afternoon. From 911! creators Thomas “Dangle” Lennon and Ben “Junior” Garant, the film joyfully mocks sports movies, Van Damme’s Bloodsport and its ilk, and offers more kicks in the groin for the buck since The Whales of August.

Dan Fogler, who channels Jack Black better than Jack Black, plays the portly mop-haired former child ping-pong superstar Randy Daytona, who was humiliated in the ‘88 Olympics and is now a has-been loser doing casino nightclub shows. As metal head Daytona, Fogler who I’m having a hard time remembering from anything else I’ve seen contributes a great deal to the overall enjoyment of the picture. 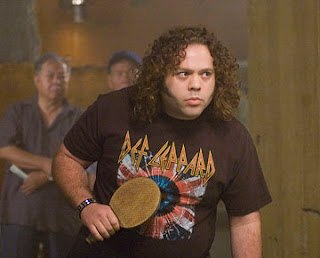 The wackiness really takes off when Daytona is recruited by FBI Agent Rodriquez (George Lopez) to join the high-stakes tournament hosted by Triad gun-runner and ping-pong enthusiast Feng (Christopher Walken), who’s decked out like a Thai madam on payday.

Randy returns to form with the help of sightless ping-pong master Wong (James “Lo-Pan” Hong). Hong provides a hefty amount of laughs and cheerfully chews up the scenery with blind jokes and kung-fu mockery. Wong's hotter-than-Kung-Pao niece Maggie (Maggie Q) aids in young Randy’s training and soon becomes the beefy dude’s sweetums. Wait, did this just turn sci-fi all of a sudden??? 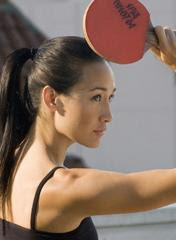 Balls flourishes in sight gags, cheeseball production design, and fun-loving, over-the-top performances by all, but especially Hong, Walken, Lopez, and comic genius in the making Lennon. Director Garant maintains a smooth rhythm and keeps the tone amiable and the jokes surprisingly sharp, something that was missing a bit from his first film Reno 911!: Miami.

Goofy and insipid, Balls is also good-natured and relatively harmless, and it arrives as a late August treat in a shit-filled summer full of overblown, hyperactive, migraine-spawning blockbusters. So just turn off your brain and prepare yourself for 90 minutes of farts and giggles. Oh, and ping pong.