A NOTE ABOUT FEBRUARY'S THEME

Being a red-blooded, rare steak-eating, cheerleader-ogling, Russ-Meyer- movie-watching blunt-foreheaded male, I don't care much for so-called “chick flicks”. The sappiness. The whining. The syrupy mushyness of it all. But don't get me wrong. I do not hate so-called “chick flicks”. Some of the finest comedies, dramas, and romances have been unfairly pigeon-holed into this made-up category. In fact, I don't care much for the term “chick flick”. It's reductive, simple-minded, and maybe a wee bit insulting. Am I right, Ladies? The term was born out of a knuckle-dragging frat-boy marketing boardroom to put works with a female-bent in a corner. And as we all know, nobody puts females in a corner.

But the female-oriented movie has been around since way before Swayze did the hard-abbed cha-cha in the 80s. Films specifically designed to attract female audiences were once known as women’s pictures during the era of Classic Hollywood. The “women’s picture” genre is mostly comprised of melodramas, romances, and light comedy starring such icons as Joan Crawford, Bette Davis, and Doris Day. But the genre evolved and transformed in the last few decades of the 20th century, during the feminist and post-feminist social and cultural upheaval. We saw less tragedy and gender assignment tales and viewed more upbeat and empowering stories fashioned for today’s woman. 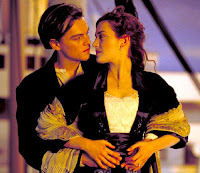 Now, do I really believe that? After all, I’m only a red-blooded, rare steak-eating, cheerleader-ogling, Russ-Meyer-movie-watching blunt-foreheaded male who only believes what Roger Ebert tells him. If I see enough of them, will I fall in love with the genre or continue to avoid it? Time will tell if either result comes to pass as I plunge into 28-ish days full of “chick flicks” in this month’s Tremendo Time theme: Chick Flick Fest. Starting tomorrow (2/2/09) the blog will be transformed into a frilly wonderland where all chicks and their flicks will be welcome and scrutinized.

Comments are welcomes and encouraged, especially from you chi-… er Ladies out there.