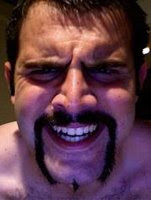 Movie reviewer Chuck Marvin possesses the uncanny ability to dissect cultural movements and trends to their bare minimum revealing with surgical precision the forces that rule the world and bring man down - literally. Caustic critic of the female industrial complex, grim de-constructionist of the vast matriarchal conspiracy, and longtime friend of Tremendo Time, Chuck Marvin returns to grace the blog with one of his visceral, incisive, and brutally honest treatises on the state of film today. Creator of an all-but-forgotten legendary column, Chuck Marvin breaks down the real reasons why men go to Dixie Chicks concerts, exchange football-filled Sunday afternoons for lamp shade antiquing, and eat yogurt. Here you will read the truth. Here you will see the light. Here you will know in the simplest of terms, in the most convenient of definitions, why it's all her fault.

Or maybe he's just a dick.

You can learn more about Chuck Marvin here.

Figuratively castrated men, males only by anatomical definition, bemoan their current relationship circumstances while a collection of perfectly outlined women: controlling, manipulative, materialistic, whiny and self-involved, try to figure out why they can’t crack the answers to their coupling woes.

Anyone who holds out hope that the real male is somehow still breathing should watch He Just Isn’t That Into You and euthanize those Utopian thoughts once and for all.

Then at some general era in the 1980s—in that sad period of time that welcomed in When Harry Met Sally and Sleepless in Seattle while bringing an end to the insight of Bronson, Dirty Harry and the films of Sam Peckinpah—the chick flick was born.

And men haven’t been the same since. This embarrassing excuse of a genre has endured because men continually yield to the whims of their significant other, for some reason afraid of the backlash if they don’t take a stand. The chromosome with the danglers doesn’t fear the consequences. He enacts the consequences. Yet even Eastwood starred in the Bridges of Madison County. What kind of example is that?

So this behavior has given life to a string of forgettable sin-ematic atrocities. Give a woman a genre and soon she’ll control your rightful genetic dominance.

Not that it matters, but here’s the gist of He’s Just Not That Into You. There’s some sniveling female who acts as narrator who starts the film repeating her mistakes because she pines for that douche who plays Eric in that pitiful Entourage show, but Eric, who is equally whiny, has the hots for Scarlett Johansson, who is in turn hot for some dude she hooked up with in line at a grocery store, who in turn is being bossed around by his manipulative, materialistic, control-freak wife Jennifer Connolly, who pretends to be calm and collected and gives insightful advice to the narrator chick. Can you see where this is headed? That perhaps confused narrator chick will find some epiphany while manipulative Connolly will have her perfectly structured dream life shattered? Oh, you didn’t. Don’t yell at Chuck Marvin. Thank Chuck Marvin, especially if you allege to have a pair, because Chuck Marvin is saving you the time of enduring this celluloid wench.

Oh, Drew Barrymore is in the movie too. Chuck Marvin really isn’t sure why. And Justin Long, who used to bang Barrymore, but now they’re just friends. You see, Barrymore is great at playing the modern male’s ideal female: flighty, carefree, jovial. What the modern male doesn’t understand is that works for a weekend in the Bahamas with a bottle of Cialis, but after that the whole free-spirit thing sort of gets old.

Or maybe Justin Long did understand this, because he isn’t spending weekends with Drew in the Bahamas anymore. Long is this movie’s most interesting case study in terms of the castrated male. He’s the advice doctor, a bartender who can score with whatever woman he wants, but doesn’t get involved. The writers of the book/producer/director of this flick consider this a bad thing and decide to utterly gut his maledom by having him fall for our confused narrator. Never mind that Justin could romp with some way hotter bartender at a moment’s notice. Why in the world would that be a good idea? It makes far more sense to trade one’s dignity for the love of an “enlightened” loon.

Sadly, there’s more. Chuck Marvin hasn’t even gotten into the whole Jennifer Aniston/Ben Affleck nesting debacle. Here’s a dude who digs her, but she wants more. It’s not enough to be happy and with someone who you can trust. No. It just doesn’t cut it unless Jen has that magical ring. Who’s the real Gollum? In the sequel, be sure to title this subplot He’s Just Not That Into Divorce Court.

And if that’s not enough, this example of modern liberation includes more than enough trendy staples: yoga class, vegans, a green ad agency, the obligatory gay friends and sassy, overweight black women (and somehow this isn’t viewed as an outrage in casting stereotypes). But the coup de grace is the dude who’s piping Scarlett instead of stuffing stuffy Connolly. Control-freak Jennifer is much more concerned about whether her Playdoh vertebraed hubby is lying about smoking. You see, because cigarettes are evil. Before there are those of you out there who argue that Chuck Marvin missed the point about the cigarettes, that it’s really about hubby’s lying, Chuck Marvin argues that if Connolly would quit attempting to control every facet of this sad soul’s life, he might not be so whipped into the fear of the conflict. Yeah, there’s give and take in every marriage. You give and she takes. Sorry Jennifer “God” Connolly that he can’t always been remade in your image. Spine optional. Maybe a willingness to allow a nuance here and there isn’t such a bad thing.

This might be a healthier answer than complaining about his matrimonial philosophies (Aniston), or luring the married man into a sordid affair, only to jump ship when wifey intervenes (Johansson), or mapping out every aspect of his life.

At least there’s one nugget of truth that this latest genre fool’s gold has unearthed. In this chick flick, He Might Not Be Into You, but it’s still all her fault.
at 5:00 AM

This guy is horrible.