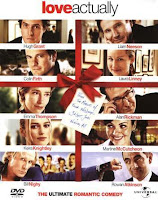 England, 2003, the day after Thanksgiving which the British do not celebrate but should because turkey is tasty. It’s five weeks until X-mas and a randomized sample of London residents are undergoing trials and tribulations of the romantic kind. But the sample doesn’t seem so randomized after all as almost everyone is linked to one another. First, you have the newly elected and hopelessly handsome Prime Minister (Hugh Grant) whose hots for his curvy caterer Natalie (Martine McCutcheon) grants him the cahones to stand up to those jerk Americans and their lecherous President (Billy Bob Thornton). His sister Karen is undergoing marital issues with husband Harry (Alan Rickman) who might be cheating on her. Their friend Daniel (Liam Neeson) recently lost his wife, has the hots for walking stick Claudia Schiffer, and has a depressed step son who has the eleven-year-old hots for a golden-voiced classmate. Harry’s employee Sarah (Laura Linney) has the hopeless hots for Harry’s hunky partner Karl (Rodrigo Santoro) but she’s got a tragic burden that’s preventing her to commit her hots. Sarah attended the wedding of Peter (Chiwetel Ejiofor) and Juliet (Keira Knightley) which was planned by best friend Mark (Andrew Lincoln) who has the hots for one of them and is tortured by this secret desire. Peter and Juliet’s hors d'œuvre were served by stinky smart ass Colin (Kris Marshall) who’s saving up money to move to America, the land of milk, honey, and hot and cold running ass. Also in attendance at the wedding was mystery writer Jamie (Colin Firth) who was recently jilted and sent to Portugal to finish writing his novel and fall in love with feisty housemaid Aurelia (Lucia Moniz) who are separated by culture, geography, and a language barrier. And revolving around this entire trauma is washed-up pop singer Billy Mack (Bill Nighy) who’s trying to make a comeback with his X-mas pop ditty, lay off the heroin, and keep his pants on national TV. But X-mas Eve is a time for miracles, and somehow everyone will get what they want, some in happy ways, some in tragic ways, and some in horny ways, because love actually is wonderful, miserable, and slimey.

Love Actually proves that there’s no love like movie love, and the film tops all previous lovey-dovey movies by playing out like the ultimate iPod romantic comedy playlist. Although this multi-layered ensemble often feels like a string of coming soon movie trailers, the film is well-supported by a charming cast and a frequently humorous and touching script. Writer-Director Richard Curtis (Notting Hill, Four Weddings and a Funeral) takes some of the most well-known and esteemed acting talent and structures a series of situations complicated by love in various ways, links them all together however haphazardly, and brings them all together in the end, all the while balancing a light, affecting, and funny tone. The cast is exceptional, with Nighy being the stand-out and his hysterical portrayal of a reformed druggie rock star. Grant, Thompson, Firth, Rickman, and Neeson are also typically great, but it’s cutey-pie McCutcheon, the always reliable Rowan Atkinson as a store clerk, Neeson’s kid whose name I forgot, and the wonderful Moniz who share some fine scene-stealing. Though the movie at times seems a little forced and overly sentimental, these moments of tragic circumstance are thankfully few and are interrupted by moments of laugh out loud hilarity. What emerges is not a simple treatise of love life, but a bare exposure of the romantic comedy genre and its lack of depth but powerful ability to evoke. Love Actually has much warmth, laughs and feel-good appeal coming out the ying-yang and its shameless, irresistible romanticism will have you running for the hankies.
at 9:16 AM

This is a movie that I never tire of. :D

Jamie was jilted after the wedding and he wasn't sent to Portugal to finish his novel. He left. And he went to the south of France - Marseilles, where there is a large Portuguese community; on his own to escape the heartache.

Thanks for the correction, Anon.