Fan conventions have unfairly garnered a negative stigma unparalleled since Grampa’s gonorrhea. Whenever I announce that I’m off to the latest horror movie convention, which include Horrorfind, Chiller Theater, and Cinema Wasteland, I get ridiculed and ostracized by friends, family, and even fellow geeks. I then feel low and ashamed for attending my fan fests - and this is hurt coming from a guy who wears a wrestling mask for a living! I suppose the source of nerd abuse is directly linked to Star Trek fans whose social awkwardness, pimply virginity, and general creepiness has fed the endless supply of can’t-get-a-date, living-in-the-basement-with-Mom jokes. But really, what’s the difference between some nerd in a Captain Picard uniform and some idiot fully painted from bald head to beer belly in New England Patriot colors?

Anyway, one of the cooler fan conventions is Fangoria magazine’s Weekend of Horrors. The west coast version was recently held in over this past weekend and my peeps and I had a blast. Unfortunately, my worthless Personal Assistant forgot the camera so you’ll just have to use your Goddamned imagination for once in your life for this quick summary of the day: 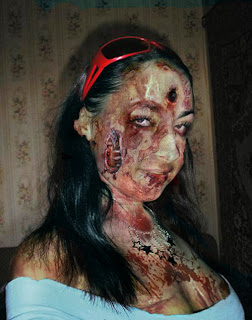 I’ve been to WOH four times before and the last one in 2006 nearly made decide to stop attending, but this year was really fun. So don’t let the insults of your crazy grease-painted Steeler fan neighbor or your drunken Mariachi-band loving uncle dissuade you. Attend one of these things.
at 9:10 AM