I'm in charitable spirits today, so as a present to you, my loyal fans, friends, and masturbatory acquaintances, I gift you a rundown of my day:
7 am - Opened eyes, shook the dream from my sleep, stared into the dusty sunlight to gaze upon a new day the Good Lord had bestowed us, woke up whore

7:15 am: Searched for bacon. Beat cook for not having bacon. Found bacon beneath unconscious cook.
8:00 am: Gotta have my Good Day L.A.!

8:14 am: Fed Carl Weathers. Heard 197th Stallone-related fart story.
9:00 am: Santo phones, tells me I'm late for call time. I threaten his life then shine my little shoes. Carl Weathers strong arms me for another hand-out. I poison his chili beans.
10:11 am: Worked out with Xander Berkeley. He knocks me off the treadmill after my upteenth "Did you stop the magma?" joke.
11:55 am: Woke up face-down on a rolling treadmill. My working-out mask is torn to shreds and my face is exposed. I briefly burst into flames. I shriek out of the 24 Fitness, my eyes igniting at the touch of the unholy sunlight. L.A. rays are a bitch!
12:43 pm: Replaced mask then went to lunch with Cradonna, Satchra, and Umargo (Lithuanian swimsuit models) at the Ivy. Forgot my wallet; had to pay with Satchra's remaining teeth.
12:44 pm: Beat a paparazzi to death. He thought I was this guy!

1:59 pm: Was arrested for death of paparazzi. Went to Hollywood booking station. They waived the fine because they couldn't break a $20.
2:16 pm: Santo leaves his 16th message. Says I'm five hours late and if I don't arrive at FGP HQ in the next 10 minutes, I'm off the podcast. I threaten his life again and then bake a ham.

3:00 pm: Daniel-Day Lewis leaves his 10th message. He is still stung by my sarcastic comments following his Oscar speech. I push him over the edge when I leave a sarcastic phone message referencing milkshakes, left feet, and names of the father. He is later found wandering Melrose wearing nothing but discarded hot dog holders.
3:15 pm: Nap.

4:22 pm: Schu calls to inform me that Santo has officially fired me from FGP. I ring up Santo and remind him of my knowledge of the "Strawberry Shortcake" incident and I'm back on the show.

6:42 pm: Arrive at Mr. Chow's for dinner with Nicholson, Redford, and Willis. Unfortunately, it's dinner with Gibby Nicholson, Kerney "Vitamin K." Redford, and Bruce Willis.
8:30 pm: Settled down for an evening in front of the plasma to commemorate the passing of Charlton Heston. Love him or hate him, the man was a superstar and bigger than life, and despite his late life controversial politics, many of today's film fans don't know that in his younger years he was an ardent supporter of the Civil Rights Movement and fought against racism in the entertainment industry. Some may criticize his acting ability, but you can't question the intensity and physicality he brought to every role. He has long been a part of my film viewing lifetime, from Ben Hur to El Cid to Midway. Easter time wouldn't feel the same without Heston's Moses chewing up the scenery in the yearly airing of DeMille's The Ten Commandments, the original Planet of the Apes would not have the same knock-out ending without his tortured bellowing at the half-buried Statue of Liberty, and Welles' fascinating post-noir Touch of Evil would not have the same stylistic impact without Heston's unfairly ridiculed but intensely portrayed framed Mexican lawyer. He embodied the energetic zeal of big Hollywood movies like Earthquake, Airport 1975, and Soylent Green by matching his performance to the loud spectacle, paving the way for today's bombastic blockbusters. Let's face it - Heston was a big American badass, sculpted like a Greek statue, and contemplative and visceral at once. 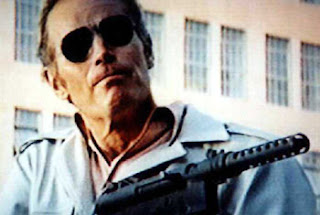 Tonight, I'll be toasting his memory to my favorite Heston film, The Omega Man, the 70s adaptation of the Matheson novel which re-adapted as the rather lame 2007 I Am Legend. Today's stars such as Wil Smith could have learned a lot from Heston. He was more than an American Film legend, we was a World Film legend. Love him or hate him.

11:00 pm: Santo left a flaming poop bag on my doorstep and now my favorite Reeboks are ruined. He will rue the day. Oh and rue he will.