FGP is Back and What's New with Queue?

Well, the Film Geek Primer podcast has returned after a six-month absence. It's nice to be back in the podcasting saddle, actually. Lots of exciting stuff is in the works so I hope you will be there to join us as we continue unraveling our warm blanket of geekery over the cold toes of America. I met up with the geeks last weekend and it was like we never separated. I had a good time catching up with Steptoe, Bub, and the talking robot dog. So many memories.

So you may be asking why we were gone for so long. Honestly I answer, I don't know. Some of us had jobs I guess. Others had family and kids to attend to. Still others trafficked meth. As for myself, I had movies to watch, and to aid me whittle the hours away in Fortress Tremendo, I turned to old trusted friend: Netflix. But nevermind the titles I've already seen. What about the ones I have not yet seen? Here's a random sampling of interesting stuff that's currently on, what the kids nowadays call, my Netflix 'queue':
#15: Long Weekend

This one comes recommended by old friend, movie fanatic, and FGP fluffer Billzebub. All I know about this movie is that it's about a careless Aussie couple who head out into the wilderness for a camping trip. Along the way, they litter, kill animals, and generally act like jerks. Mother Nature then decides to drop the margarine and get even with these two squirrel-squishing Paul-Hogan lovers by unleashing the fury of the animals upon them. It's pretty much played up in the spirit of other animal vengeance tales such as Day of the Animals, Devil Dog: Hound of Hell, and Basic Instinct, but Billzebub swears it's a whole lot better and fun watch.
# 27: Ganja & Hess

A sub-genre of blaxploitation, a topic FGP must tackle at some point, is the Black urban horror film. The popular titles in this vein are Blacula, Scream, Blacula, Scream and Blackenstein which were so ridiculous and out there that even within the context of blaxploitation, they can't be taken seriously. But, there were a couple of real horror gems to come out of blaxploitation, must notably the zombie thriller Sugar Hill, the demonic ghost story J.D.'s Revenge, and the possession film Abby. Regardless of the amateurish writing and questionable acting, these films were energetic, were masterfully horrific despite low budgets, and really tried to say something. Ganja & Hess raises the artistic bar among these films by presenting an abstract and expressionistic demon possession and vampire story. It has less to do with Blacula and Super Fly and relates more with Argento and Antonioni. The current DVD features the severely cut theatrical release, the original vision is probably lost to the ages, yet is worth watching for its distinct and radical style.
#400: The Colossus of Rhodes 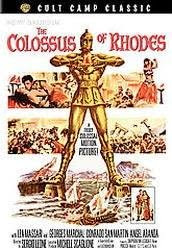 From Fistful of Dollars to Once Upon a Time in America, Sergio Leone is one of the true cinematic masters. But before the brilliance and pageantry of sheer genius emerged, Serge was just another Italian schlep trying to turn an honest buck in this kooky life of film. He got his start in "sword and sandal" epics, a cornerstone genre of the 1950s. These movies generally featured the fantastic exploits of Hercules, Maciste, and other mythical heroes. Leone's Colossus of Rhodes is a story of love, betrayal, and rebellion in the ancient port of Rhodes guarded by one of the Seven Wonders of the Ancient world, the Colossus. I'm curious to see this early Leone film just to see him work in a genre other than Western or Gangster. Film Geek Santo saw it and wasn't too impressed but, I'll have to see it for myself.
More from the 'queue' later...
at 3:25 PM