It’s the 1930s, and actor Tyler Walker goes ape shit when his wife Myrna takes up with another lover.  One night in his rotting Los Angeles mansion, he’s holed up in his room dancing with a mannequin mock-up of Myrna that he stabs repeatedly.

But just as the cop break in to cart him away, he hangs himself.

Decades later, Myrna’s last living relatives, the Cates family – Dad (Melville), Mom (Bundy), son Scott (Breznahan), and daughter and aspiring artist Robin (Whitlow), inherit the now-dilapidated mansion.   Strapped for cash and on the verge of bankruptcy, the desperate family reluctantly moves into the house with the hopes of renovating and reselling it for quick cash.  Unfortunately, they discover that a skeevy band of no-good punks are squatting on the property.

At gunpoint, they chase away the gang who vow revenge, specifically on teens Scott and Robin, and start with greasing the family cat.

To add to their troubles, some spooky shit goes down in the form of strange noises, voices in the dark, and an eerie figure that appears to Scott in the night, obviously Walker’s ghost.

The street gang, led by the highly unstable Silk (Burgard), prey on Robin whom we learn is a doppelganger for Myrna, prompting Walker’s spirit to become more active.  They torment the family and at one point try to kidnap Robin disguised in Halloween masks.


While their parents are out of town, the kids hatch a plan to lure the gang back into the house (genius!) where they promptly Scooby Doo the shit out of them by staging phony death scenes. 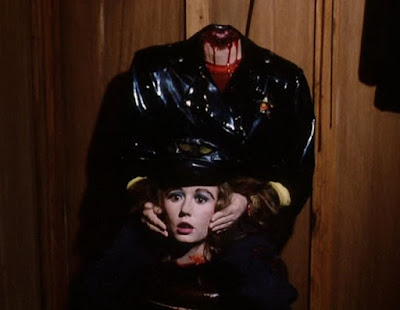 Scared shitless and filled with rage, the gang return to the Cates' days later, this time with murderous intent only to find that Walker's ghost has leveled up to the point where they and the Cates kids may find that history has a way of repeating itself.


Roger Corman, without doubt the King of B-Movies, has had an extraordinary impact on the bad movie world in addition to cinema in general.  While his output has been generally relegated to the seemier aisles of the video stores of long ago or ad-riddled free streaming movie sites of today, he does lay a golden egg once in a while.  So phrases like “refreshingly competent” and “surprisingly entertaining” typically do not show up in your average Corman movie review.  But both aptly can be applied to Twice Dead, a movie that by all indications looks like it sucks, sounds like it sucks, and should suck but doesn’t suck.  Though low on scares, this teen-driven haunted house caper succeeds due to fine pacing, very affable leads who oddly enough act more like a couple than brother and sister (!), dopey but fun gore, and some pretty cool cinematography.

This direct-to-video effort aims a little higher than most, but fails to play out key elements like what made Walker so crazy?  Why was Silk’s gang so obsessed with getting even with the Cates?  What enabled Walker to become such a powerful ghost?  I mean, he kills a guy with a motorcycle and electrocutes a fornicating couple with a telephone wire.  Let’s see Slimer try that shit!  But such as it is with most movies like this from this era the lack of satisfying narrative closure boils down to time and money.  Sure no one expects to find subtext and depth in a 90-minute throwaway flick, but it’s always a treat when it does happen, and Twice Dead certainly had the potential.