Matt “So Not Hitler” Mitler, Ruth “Maybe Mexican?” Martinez, Bill “So Not Alfred” Hitchcock, Connie “So Not Jolly” Rogers, Frances “So Not Underwear” Haines, Morey “I Got Nothin’” Lampley, Jack “Hacked ‘Em” Chatham, one Pissed-Off Psycho Papa, an Awkward Matricide, and A Doofus Whose Death Even Atheists Will Pray For.


Young boy Ed Jr. (Mitler) is excited about his father's birthday so as a gift, he cleans each of Dad's gun from his extensive collection.  While messing around with one of the rifles, Ed Jr. accidentally fires and kills his mother who's in the next room. When Big Ed comes home, he does as anyone would do in this mournful moment and pours himself a drink over his spouse's corpse.

Along the way to the beach house, they deal with a jalopy car, booze it up down the Gulf Coast highway, and put up with wisecracks from their asshole friend Ralph.  This fucking guy:

They find the beach house abandoned and in disarray as Big Ed has left behind some disturbing mementos for the kids to ogle, but they decide to make the most of it anyway.  But the fun soon grinds to a halt when members of the group go missing.  (Drinking game hint: take a gulp every time someone mentions the whereabouts of  "Mike and Linda".  You will need a kidney transplant.)  And we learn that Big Ed may not have abandoned the house after all.

No one is safe from Big Ed, not even the cops.  And the final showdown between kid-killer Big Ed and Mommy-killer Ed. Jr. is set.


The Mutilator is somewhat of a head-scratcher.  It’s got an identity problem.  Not because of the plot or anything – far from it.  The streaming version I watched has the title “Fall Break” displayed in its opening credit sequence.  That was the original title that was changed for the U.S. release probably because it sounds like a teen comedy, which it could have been mistaken for if you’d skipped the opening sequence and watched the first half-hour.  So why would a new digital transfer of it, on Amazon Prime no less, still display the original title?  Also, Amazon dates this movie as 1978, but IMDB lists it as 1984.  But based on the clothes, hair, cars, and general saltine cracker plainness of the cast this thing screams late 70s.  Another giveaway of its 70s signature is that one of the characters refers to a video arcade game as a “video machine”.  Huh?  I may be getting on in years but I’m pretty sure that we were calling them video games by 1984. I do however seem to remember this movie being perpetually on the horror shelve at the video store back in the day with its fantastic poster on the cover.  I’m also sure if I did just a smidge more research I’d find the answer, but damn it, it’s #31DaysOfHalloween and I’s gots moobies to wartch! 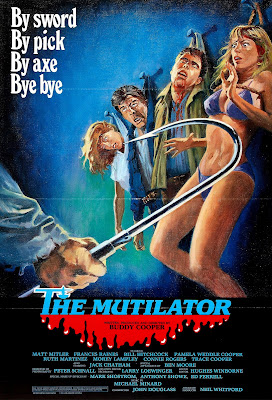 Regardless, The Mutilator screams pure slasher movie goodness.  Not because it’s good, but because it’s classically symptomatic of the genre: goofball horny teens, a creepy location far from civilization or help, a ruthless maniac, a catchy pop tune over the credits that sounds like a K-Mart version of Hall & Oates, and more limp jokes than my last prostate exam.  The son-killing-Mom aspect sets an off-putting tone in the opening sequence and is so weirdly and awkwardly presented that I was sure it would have created some unique tension or psychological effect on the Ed Jr. character.  But it doesn’t.  As an adult, Ed Jr. is just another lay-about horndog who sees helping his widower Dad/teen stabber as an annoyance.  Besides an explanation that the Dad became a worldly hunter after the death of his wife, we see little to no motive behind his massacre or his ability to chop cops legs off after being dissected by a sedan.  (Spoiler).  The movie does get particularly nasty towards the end, another hallmark of horror films where they leave the monster reveal and the bloody good stuff until we’re close to the final curtain, and hints at a Final Girl showdown that fails to materialize.  The effects are pretty decent and ahead of their time, that is if this thing was indeed shot in ’78.  I will recommend The Mutilator for your Halloween marathon for the bloody, choppy, gory final sequence and for bringing back memories of the hometown video store: the smells of buttery popcorn and Jolly Ranchers, the rows upon rows of gnarly VHS treasures, and that giant fish hook jabbed in your gullet.