It’s Halloween!  And you know what that means: relatives escape their respective nuthouses and come home to chop up other relatives.  Ah, October in America.

Malcolm O’Keefe (played by immortal That Guy Peter Jason) is railroaded by scheming floozy wife Joan (Snodgress) and committed to the loony bin so she can get her hump on with Richard (Carradine).

He leaves behind his precocious son Chris (played to the tubby hilt by the director’s son) who’s obsessed with practical jokes and magic tricks.  He also has an extensive collection of vintage circus posters, you know, like all kids did in the 80s. 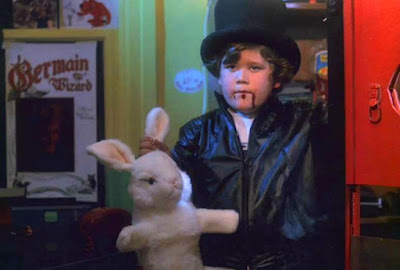 Meanwhile, Malcolm stews in the funny farm and plots his revenge against his two-timing Kwai-Chang-Caine obsessed wife.  We’re never sure if Malcolm is a true victim of a plot, actually crazy, or a whacked, cracked, and immensely talented character actor.

This particular Halloween night, Joan and Richard are off to some party and leave Chris in the care of professional babysitter Linda (Giroux), who’s also a struggling actress afraid of losing her day job.

Over the course of the evening, Poor Linda falls prey to Chris’ stupid pranks including:

Eventually Malcolm busts out of the mental hospital and heads home to make wifeyburgers out of Joan using an ingenious plan that references something millennials won't get.

Linda meanwhile has to contend with greedy trick-or-treaters, her bonehead boyfriend Brett (Railsback), and the chub's relentless hijinks.  But the final showdown is within sight when Malcolm comes home to rip everyone to shreds.

So Linda and Chris team-up Home Alone style and defeat Malcolm's murderous intent. But unfortunately Linda didn't account for the old like father, like son adage.

So sure a sequel is set up for a series that never happened, but to be honest I just came for the 80s’ Halloween decorations: 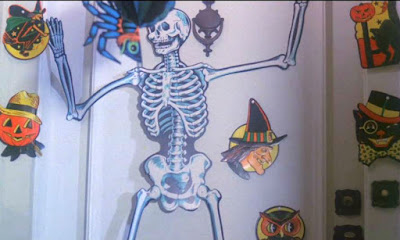 
This spoof of Halloween-set horror movies was directed by prolific director and cinematographer Gary Graver, who’s got an arms-long list of credits from B-movies to pornos to working with Orson Welles.  And while his heart seems to be in the right place, the abjectly low budget quality, rank amateur acting, and lack of humor or tension in Trick or Treats makes it a serious chore to enjoy.  A few familiar faces appear including Carradine, Railsback (who literally phones-in his role), and Snodgress, a veteran of more serious film and TV, I guess.  Other cameos include exploitation actress Jillian Kesner (of Firecracker fame, another humdinger of a bad movie), B-movie royalty and one-time Wimpy Paul Bartel as a dirty bum, and Twin Peaks’ Log Lady Catherine E. Coulson as a doofy nurse.  Lead Giroux is obviously playing someone at least ten years her junior, but she’s generally likable but unfortunately wasted.  But the standout is Peter ‘effing Jason (48 Hrs., They Live, Blue Streak) who plays Malcolm with wild, dorky, and insane abandon.

Unfortunately, I cannot recommend Trick or Treats, which goddamn it, should have been titled Tricks or Treat since the kid plays multiple tricks and treats rarely materialize.  I cannot recommend it for your #31DaysOfHalloween or Halloween night marathon because of its deathly slow pace, lack of laughs, and its inability to emerge as either a funny horror satire or kiddy scare flick.  I have to note, though that there is an interesting scene where Linda answers the door to trick-or-treaters and it’s two boys barely made up as ghouls who ask for candy.  Linda gives them treats but one of the kids complains that he only got a piece a paper and no candy, an obvious flub, and then the other kid slaps his shoulder clearly indicating that he messed up.  Hearty laughs are exchanged and Giroux is able to save the scene.  It’s not much, but it’s a small genuine moment in a cheap, obviously rushed movie that I’m glad Graver left it in.  So if you have to be one of those guys (like me) who needs to be a horror-movie-set-on-actual-Halloween completist, then please by all means watch this movie.

Speaking of Welles, he appears in the credits as a “Magic Consultant”, which I’m sure he earned over a few dozen chili dogs with the director at Pink’s.  RIP, my chunky brother.
at 1:00 AM