As I sit here at Rancho Tremendo, still wallowing in post-Thanksgiving bliss, stuffed with turkey razzleberry dressing swirling in my gullet, I find myself finally getting into the X-mas spirit. But I know a lot of people who dread this merry ol’ time. And that bothers me.

Everyone in Tremendo Land seems really indifferent this year. No one in my close circle of pals, debtors, and acolytes seems particularly excited that X-mas is near. I am alone in my excitement for the holiday parades, street decorations and annual listing of X-mas TV specials. Call me a Sentimental Sucker.

I particularly like holiday music. Hell, I secretly start listening to online X-mas music stations like in frickin’ August. I'm always excited when the day after Thanksgiving comes and the local radio stations start playing X-mas music so I won’t have to fear being embarrassed or mocked over my fondness for the stuff. I never worked retail or unwillingly belonged to a choir, so I never got sick of the whimsical tunes that usher in the most fun time of the year.

I prefer jazz, novelty, and rock renditions over the sappy, treacle-drenched, condemned-to-Adult Contemporary-Hell holiday music. Oh, and it also helps if the songs are particularly filthy. Some of the most depressing songs about anything are recent Pop/Country X-mas songs. For example: Josh Groban’s syrupy “Believe” from the Polar Express soundtrack. Is the guy a soulful sensitive artist, or a tone deaf retard? Is there a difference? Or Faith Hill’s “Where are you Christmas?” from the abomination that is the Jim Carrey Grinch remake. Or the entire song/root-canal that is Garth Brooks’ “The Gift”.

How can anyone enjoy the holiday while Baby Jesus’ ears bleed?

I think everyone has one piece of holiday music they can't stand. My cousin Josh Tremendo absolutely hates Jose Feliciano’s "Feliz Navidad" for some reason, despite being a life-long Mexican. A business associate breaks out in hives when he hears “Frosty the Snowman”. Perhaps it's his fear of Promethean snow avatars? An ex-girlfriend freaked out whenever she heard “Carol of the Bells”. Did it remind her of the Exorcist theme or is she just nuts? Ask her therapist.

My most depised song is "The Christmas Shoes". Talk about depressing! Friends, this song is about as cheerful as a kick in the crotch or a Rod McCuen poem. I won't list the lyrics, but here's the basic story: (No flames for accuracy, please). The narrator of the story is either a customer in a store or a shoe salesman. Let’s call him Al. Some dirty brat cuts in line and asks the guy for the best pair of shoes in the store. Trouble is, the kid’s got no money but really needs the shoes because, you see, his/her Mom is meeting Jesus on X-mas Eve. And I’m not talking about Jesus the gardener or Jesus the King Taco cook. 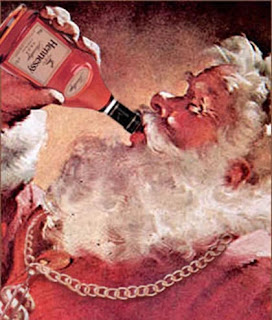 S.C. just heard the Christmas Shoes
Sicky Ma has got a date with the Man with the Scythe and the kiddy wants her to look all nice and neat in J.C. Penney loafers so the Birthday Boy won’t boot her out of the Lofty Eternal Golf Club in the Sky. As if! So Al is feeling appropriately guilty at the kid’s lack of scratch for a pair of Ones and Twos. He drops some bills and the kid tootles off and presumably watches Ma kick the bucket in her pleather flip-flops. I’d like to think the kid and Ma shoot-up. Al then has dump trucks of cash dropped off at his house after releasing a song about the heart-tugging experience as the Ma-less brat never has a fun X-mas the rest of is/her life. It’s a triumph for sugary banality.

The first time I heard it, I was driving somewhere for X-mas, listening to a radio call-in show that had nothing but the most weepiest, most depressing callers ever. Christ, I know people have got it bad, but do you need to share it on the radio in between my doses of sweet ol' Burl Ives and Weird Al? And then the DJ perpetuates the agony by gifting the poor saps with cool loot like TVs, gift certificates, and X-mas feasts. Anyway, after story after story of some chick who lost her husband on X-mas eve in a rollover, or the kid with the sniffles who’ll miss out on Santa’s visit, or the house that burned down and left Ma and Pa Kettle to sleep in the Wagoneer, we came to the Christmas Shoes. I developed diabetes after the first refrain.

Could it be that even I, the Sentimental Sucker, am too cynical to enjoy its mind-numbing triteness? Or could it be that this song is just not good? I think there’s a certain level of breathtaking sweetness that we are willing to accept because of the way it is crafted or
honestly heartfelt, like the Vienna Boys Choir rendition of “Little Drummer Boy” or Sinatra’s “Silent Night” or Red Peters’ “I’ve Got a Boner for X-mas”. Christmas Shoes seems disingenuous to me. Maybe it’s too easy to mix a lonely, broke cherubic kid, a piss-pot sick Mom, and a guilt-ridden shoes salesman, jaded by the consumerist avarice of the time of year, to reveal a clichéd, hackneyed notion that there’s more to life than getting stuff for X-mas and eating lots of turkey. Well, Jesus, of course there’s more!

Why can’t we just have fun and pass the pumpkin pie, sing a few tunes, and grab a few asses under the mistletoe without being subjected to multitude of sappy “true meaning” messages and Christmas Shoes that ride the airwaves and dominate my TV screen? My Jesus knows it's better to have a good time and have fun with the ones you love than kick ourselves for sins past.
So, relax, unwrap some crap, and revel in tinsel-y celebration.

I'll have my eggnog martini, my sugar cookies, and my Bad Santa DVD. The only Jesus I’m meeting Christmas Eve is Jesus the gardener and he’s getting a pair of evergreen and crimson Isotoners for Christmas Shoes.