CHARLES DICK-IN’S A CHRISTMAS IN CAROL

Director Billy Blue has accomplished the truly unique in his adaptation of the classic Charles Dickens' X-mas story into another setting and context, which has never been done before, ever. Dickens' work often lends itself well to the screen and this is no exception, despite being shot on video with two, maybe three lights. 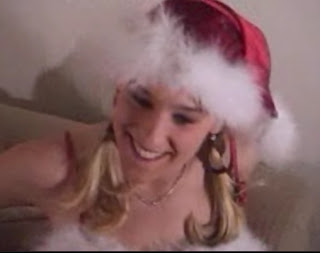 Creamcheese takes on the biggest role of her career in A Christmas in Carol.

Carol's life story is told in a series of flashbacks, facilitated by old-style yet effective trick photography. Stalwart director Blue uses this device to conjure up an earlier, innocent world in which to chronicle Carol's decent into misanthropy. This contrasts effectively with her gloomy, squalid present and doomed future in a prophylactic-less world. And each spirit has a profound effect on Carol, especially newcomer Sinn as the Ghost of X-mas Ass.

The film features a superb central performance from Suzy Creamcheese, all wayward hair, unbridled enthusiasm and all-you-can-eat eyes. She invests Carol with dignity and wit as her cynicism is gradually stripped away. Her reunion with Scratchit and Not-So Tiny Tim (Prickhard) at the end makes for a joyous transformation on Christmas morning which moved me deep down. 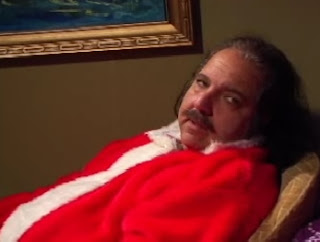 Master thespian Jeremy chews up the scenery as the Ghost of X-mas Pantless.

On the positive side, this story shows how a bad attitude affects everyone from enjoying a safe X-mas. The film ends as one might expect for a morality tale, but is none the worse for it. All in all, it is a humbling, wrist-numbing, festive treat. As Not-so Tiny Tim says: "God bone us, every one".

In this lighthearted comedy, Trixie Tee sheds the intensity of her previous roles in Frosty the Well-Endowed Snowman and Wally Wanker in Her Chocolate Factory, to name just a few, and plays Rudy, a shy crimson-nosed reindeer struggling to deal with her sexual awakening mere days before X-mas Eve. One morning, Rudy awakes to the appearance of a bright-red honker whenever she thinks about love, which she does a lot. In fact, she thinks about it many, many times. Taking on the themes of tolerance and acceptance from the famed X-mas tale, the film allows Tee to bring to her portray a surprising comedic angst and fierce energy as none previously seen from this teen wonder. 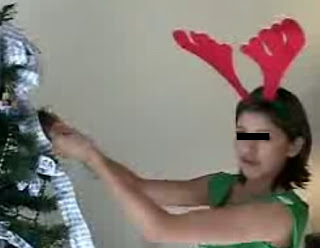 Tee's portrayal of troubled reindeer Rudy is impressive, despite the lousy CGI.

The first act is mostly comprised of Rudy’s interactions with her fellow residents of the North Pole, including a milkman, a cable guy, and three helpful construction worker reindeer. All of them are put-off by the appearance of Rudy’s shiner and she is shunned and ridiculed. Soon her boss Santa () discovers her red-nose problem during a heated encounter in the stable and he fires her from the sleigh team. Rudy, distraught, returns home and meets a "perfect stranger" in the form of the lovely Lulu the Elf (Cash) who steps into her life and brings magic. And a few toys.

Even the Easter Bunny gets in on the fun in Rudolph.

Lulu persuades Rudy to file a discrimination lawsuit against Santa. Bearing a grudge against St. Nick, she even creates fake photos of Mrs. Claus (Boudoir) in a leather-clad embrace with a Snowman in icy-bun-exposed pants. Ironically, we discover the encounter actually happened in a stirring, stark flashback. Despite Rudy’s protests, the photo gets sent to Santa and events start spinning like a X-mas snow globe in a blizzard, eventually changing Rudy's life forever. Oddly, for the rest of the film, Bi-Curious flirts with being politically correct and becomes predictable as Rudy confronts Mrs. Claus, who rejects her at first but is eventually swayed into accepting her. Santa suddenly finds the pair, engages in discourse with them, and learns the error of his ways. All is well again and Rudy gets to pull Santa’s sleigh. 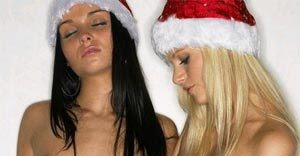 While watching the film, I caught myself feeling surprised that such a banal movie could actually be entertaining and meaningful, and this is mostly due to Tee's sensitive performance. Besides Tee, the acting is adequate, although there are a few highlights. Boudoir as Mrs. Claus, for example, is especially good and starts off great as a gauche homophobe when confronted with Rudy’s predicament. However, a few quality minutes with Rudy eradicate her prejudices, and the problem is licked. This touching scene demonstrates to us how smart women can master the most impossible situations.

This surprise winner of the 2000’s Best Far-In Stiffy award is a quiet film, with the most unlikely characters to turn it into a success: curmudgeonly residents of sex addiction treatment center in a far remote town. However, it's the subject of food and togetherness, and showing a feast to end all feasts, that endears this movie over to audiences.

Narrated by legendary director Dick Dangle, the film opens with a flashback, depicting the frustrated love lives of Nina (Juggs) and Nikki (Desire), former secretaries to President Clinton. The saga then shifts to the present, a week before X-mas, as the sensitive center counselor Marie (sizzling French actress Babineaux), enters the employ of the center after an intense interview with the tough-as-nails administrator played by the monstrous Vinnie 13. 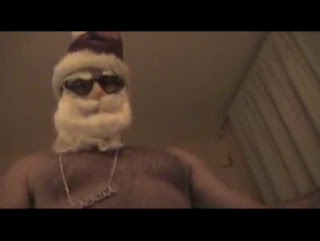 After days trying to help a motley crew of social misfits that comprise the center’s clientele, Marie decides to prepare a sumptuous banquet in honor of the center's 10th anniversary which falls on X-mas. But it isnt' as easy as it sounds. At first, the stoic clients are reluctant to participate in the banquet, but ultimately, they joyously indulge in Marie's spread.

A gentle film, Butt Orgy is an upbeat movie, despite the austerity of the characters and their surroundings. The entire ensemble is excellent, beginning with vet actors Kamelons, as a cockeyed gymnast, and Montana, as wily spinster who's still got some gas in her engine. The movie is a quiet celebration of the divine grace that meets us at every turn, and even redeems our ways not taken, our sacrifices and losses. This film should be viewed not solely for the interaction with the characters or even the expectations that the clients will be cured of their affliction. It should be viewed for its spirit of sharing, its revelation of the beauty of togetherness, and its unabashed sentimentality in these wary, uncertain days.

That and the hot ass fucking.

Other holiday titles to watch out for: Elves Doing Themselves, The Pole Her Express, and I Saw Mommy Doing Many Weird Things to Santa Claus.

I found this site using [url=http://google.com]google.com[/url] And i want to thank you for your work. You have done really very good site. Great work, great site! Thank you!