Three X-mas Movies You Probably Won't Be Watching This Year

Despite his immense popularity in the pro wrestling world, Hulk Hogan isn’t much of an athlete. He also has made many films, but he isn’t much of an actor. And if you’ve been watching his reality series and the current drama surrounding his family, he’s proven to be not much of a human being. But despite his scumbaggery, he has proven to be a reliable treasure trove of mocking goodness for the film geek. Like an answer to a prayer from absolutely no one, Hogan gifted 1996’s Santa With Muscles to hateful geeks everywhere. It also helps if you pronounce the title with your worst Schwarzenegger impression so it sounds like "Zantah viz Mua-sols". 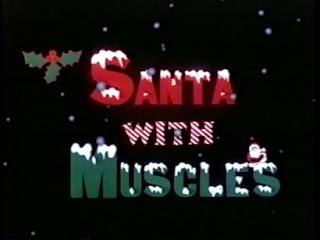 No expense was spared in the title sequence to Santa With Muscles.
After a year or so of searching, I found my VHS copy of Santa With Muscles in the middle of the Arizona . I’m sure its scarcity is due to all the little Hulksters out there who ate their prayers and said their vitamins and bought up every single copy with blind avarice in worship to the almighty Hogan.
After hearing legends of the movie’s crapacity, I scrambled for a copy, ultimately locating it at a swap meet in the rear (how appropriate) of a greasy trailer filled with other shitty movies and mysteriously stained girly mags. The guy who sold it to me had fewer teeth than I have legs. Two. 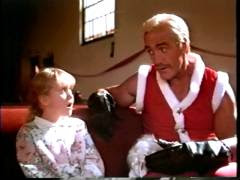 Hulk Hogan destroys yet another child by his mere existence.

Co-starring SNL vet Morris, That 70’s Show alum Stark and über-cutie Kunis, Star Trek’s Curtis, St. Elsewhere’s Ed Begley Jr., and Rance Howard’s Clint Howard, the film looks like it was put together with a Video Toaster and carefully crafted with the all aesthetics of a GoGurts commercial. The wackiness begins with the introduction of the Hulkster as some kind of fitness guru/infomercial pitchman…

Wait…I’ve gotta to stop here. I can’t do this review any justice. These guys did a much better job:

Need a Christmas Eve triple-feature featuring muscle-bound morons doing holiday shtick? Then stick Santa with Muscles, Jingle all the Way with Gov. Arnold, and Santa’s Slay with buff dork Bill Goldberg in your stocking and let the agony roll.

With a cast that boasts Broadway veterans, a Golden Globe winner, and the guy who played the doorman on The Jeffersons, it’s no wonder that Santa Claus Conquers the Martians has been hailed as a Christmas family classic. But in truth, it’s an absolute piece of reindeer shit.

Much like viewers of Deal or No Deal, the children on Mars are easily entertained by Earth's TV programs. Hypnotized by transmissions of the jolly fat man giving away toys to good little boys and girls, the kids yearn for a Santa of their very own. So the pater familias of a Martian clan consults a squeaky old cave-living sage who recommends that Mars should have a Santa Claus because Martian children have become emotionless automatons with no sense of the value of family, love, and caring, much like the viewers of Deal or No Deal. So Dad does the only sensible thing and invades Earth with four guys and the worst robot since Small Wonder. The Martian posse kidnaps Santa and two earthling children who return to Mars to work in a toy sweat shop. Along the way, a group of Martian proto-Nazis opposes Earth's cultural infiltration of Mars and war begins. Well, a pie fight. Only with toys. All's well when the good green folks of Mars realizes that it always had a Santa in the form of hilarious green-tard Dropo. Santa and the kids are allowed to go home and forget this super cheapo, embarrassing, and badly lit gig ever happened. 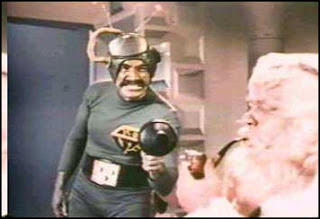 A murderous Martian catches Santa on the can. 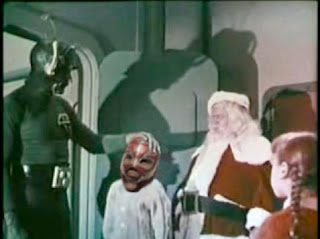 Blink and you'll miss my cameo in Santa Claus Conquers the Martians.

Calling it 'Reindeer shit' is being harsh. The movie is pretty harmless and kinda fun. I can’t mock it any better than the Mystery Science Theater guys have already done to perfection. Watch it, trash it, and enjoy.

Directed by: Frank Capra
Starring: El Tremendo, Jimmy Stewart, and some other people.

Very few know the story behind the making of what could have been the greatest holiday picture of all time: Frank Capra’s It’s a Tremendous Life. So grab a hot cup of cocoa, sit back, and listen to a tale of treachery that hindered my early career in .

I first met Frank Capra back at a pizza parlor in 1945. We downed a few slices and a pitcher or two talking business, you know, movie business. Earlier that evening, I had defended my Snooty Cigarettes© Tag Team Championship belt with my partner Cacafuego against the duo of hefty Germanic tough man Gunter Gallahad and the foppish 'Gentleman' Monty Armbruster. Capra was there in attendance mapping my every move for a possible bio picture. At the time, I had been in negotiations for the rights to film my life story with other directors such as Orson Welles, John Ford, and toddler Martin Scorcese. But I was holding out for the right script. 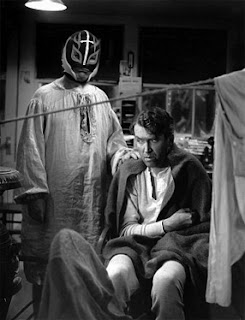 What remains of what could have been pure f*cking brilliance.

It turned out that the right script was the one I wrote: a spiritual journey to discover the value of familiar love, your own destiny, and the joy of giving to others set during X-mas in upstate New York. Here's the exact word-for-word synopsis I showed Capra:

"George Hailey has spent his entire life in Deadford Springs where he has sacrificed a career of travel and study to help garlic eaters buy shacks and get white people drunk. Dragged down by his selfish family, including a senile, syphilitic uncle, a marriage-obsessed menopausal mother, and a skirt-chasing Army-guy-saving jerk brother, he becomes trapped in an uneventful small town life.

Constantly in conflict with the Scrooge-like bowling alley baron Mister Pooter, George is unable to prevent the rich old kingpin from taking over the entire town. All that he has is a moldy old building and loan company, which was founded by his dopey stroke-prone father (deceased).

George eventually marries a pretty hot lady named Mary who turns out to be a baby factory and saddles poor ol'George with five rugrats (including one dangerously obsessed with flowers), a drafty old house, and an assload of a mortgage. Plus there's this guy who torments him with donkey impressions.

One Christmas Eve, George's Uncle Willy loses the company's total assets on whores and lollipops. Pooter retrieves the misspent money and hides it from the Haileys. A bank official doing an audit on X-mas effing Eve discovers the shortage, and George realizes that he will be held responsible, sent to jail, and lose the business, which would finally allow Pooter to take over the town. But at least he'd be away from those caroling, posey-sniffing brats. Anyway, he believes luscious Mary (who's like butta!) and other loved ones would be better off without hime, so he contemplates suicide.

George wanders to a nearby bridge over a river and prepares to jump. But the prayers of his loved ones result in an angel named El Tremendo arriving to help George. Unable to convince George that pills and not drowning is the only answer, Tremendo tries a different tactic. He shows George what things would have been like if he had never been born.

In a well-shot, widescreen vision in which the Pooter-controlled town has efficient trains, milk fountains, and lots and lots of Donut Kings, George discovers that his family and friends are pretty much the same, only with sturdier bones and protruding guts. But George ultimately decides suicide is not the answer when he finds Mister Pooter nailing Mary harder than an Amish barn.

In the end, El Tremendo transports George to a mystical wrestling ring, shows him many moves, and returns him to earth at the stroke of midnight on X-mas eve where he chokes out Mister Pooter, gets the money back, and makes baby #6. Verily, it is a tremendous life."

Capra was sold. Or so I thought. We got Jimmy Stewart to play George, but we only shot one scene: the first meeting between El Tremendo and George after his rescue where I try to convince him I'm a otherworldly messenger of a God who still thinks wrestling is real. Then, suddenly, I was out of the picture. They dumped me, retitled it, hired another guy as the angel, and completely perverted my vision.

Luckily, the movie wasn't a big hit and no one has ever heard or seen it multiple times over and over again every frickin' year since. I think you can find it at the Tanque Verde Swap Meet in Tucson for $1.99. Ask for Lewie, but please don't ask about the stains.
at 9:54 PM

For decades I had heard the rumors, and finally the truth is told. Again, El Tremendo, your bravery and grit show no bounds. What would the holidays really be like with El Tremendo at the helm? I dream the dream every night.