“You can run, you can hide, or you can start to live like human beings again. This is our Waterloo, baby!” 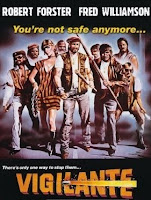 The Man called Hammer, an 70-year-old badass called Woody, a Black Hole/Tarantino survivor, Che Gayvarra, reason #120,993 not to move to New York, perpetual scumbag Joe Spinell, Voldar the Christmas-hating Martian, Dr. Insensitive McBlunt, and where's a maniac cop around when you need one?

Nick (Fred Williamson) is a pissed-off black man who preaches to a gathering of fed-up people sick and tired of having their New York neighborhood trashed by hoodlums. His call to arms against the gang that’s harassing his neighbors unleashes a wave of kidnappings, beatings, and other assorted vigilantism. Meanwhile, Eddie Marino (Robert Forster), his wife, and kid enjoy a nice day in the park unaware of the bloodshed in the streets. Later, his wife humiliates and slaps a beret-wearing gang member while he’s dousing a gas station attendant with gasoline. Eddie is out having a drink with the boys, including an inquisitive Nick who wants to recruit Eddie into the posse. But Eddie doesn’t want anything to do with Nick’s team, and instead makes his first mistake of the movie by putting full faith into the judicial system. At the same time, the gang invades the Marino’s home, shoots the kid and slices up Mrs. Marino. Eddie returns home to view the horror first hand, but the ordeal is not over yet. While the wife convalesces, he’s run through the ringer in the courtroom as the killer is let go and Eddie’s thrown into the slammer for contempt of court, after pitching a fit for this miscarriage of justice. Nick’s gang closes in on the beret-wearing gang and takes out their main drug supplier in spectacular blood splattering goodness. The ineffectual police keep the vigilantes' activities under wraps so as to avoid publicity and copycats, so the gang takes their shenanigans up a notch by assassinating police officers randomly. While Eddie is in jail, he is befriended by Rake (Woody Strode), a tough old bastard who protects him from jailed gang members and from anal intrusion in the shower. Rake philosophizes about crime and the crooked system that feeds on the innocent. When Eddie is released, he’s a new man with a mission to join Nick in his battle to wash away all the scum of the earth down the sewer. Oh, and maybe grab a beer beforehand.

Vengeance has been the prevailing narrative force since the dawn of storytelling and its dominance in film is overwhelming. In particular, urban revenge films in which the main protagonist works outside and against the law were big business in the 70s and 80s. Deemed as immoral and exploitative this sub-genre produced some great movies (Death Wish) and some not-so great (Death Wish IV). Although Vigilante lacks the depth of Taxi Driver or the frenetic pace of Rolling Thunder, it remains a cracking good thriller, with some decent action sequences and a morally conflicted lead besieged by hard luck and a shitty justice system. Forster does a good job with what little he’s given and Williamson is sometimes great, other times a parody of himself as the hot-blooded Nick, part enforcer, part farcical action clown. The film at times aims to be more than an mere exploitation exercise, but can’t escape simplistic moralizing and an exaggerated corrupted legal system. Forster’s plunge into the dark world of vengeance is interesting, but takes a while to develop and lacks any detail on his character or background to make it compelling. The soundtrack is pretty damn good, 80s electronic themes mixed with Latin rock, partly reminiscent of the original Assault on Precinct 13 with a Spaghetti Western twist. Director William Lustig (Maniac Cop) fully immerses the viewer into the unkempt lives of these morally corrupted and abused characters, making Vigilante a respectable revenge story and watch worthy.

What does this have to do with Film Noir?

Although it it November Noir, I want to mix it up a bit with thrillers and mysteries from other eras. Thanks for posting!